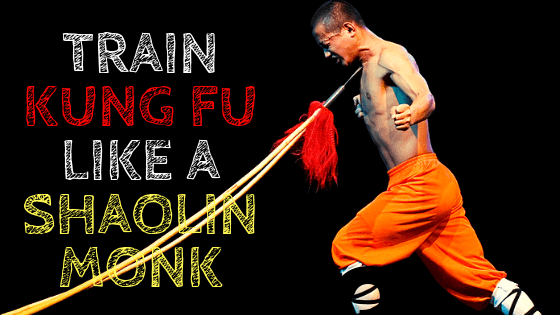 Shaolin Kung Fu cuts across all borders as one of the most respected and most powerful styles of martial arts. It is widely known for promoting extraordinary skills and practices, through its tasking, body changing traditional exercises.

So how can you train shaolin Kung Fu like a true monk ? We’ll take you through it step by step.

Everything starts from here, from the beginning to the end. If you’re ever going to survive you’ll know from the vigorous, painful traditional exercise training. This will help put your body, mind and soul in shape

Isn’t it easy? I’m guessing you’re really eager to get into training? Cool, then let’s get you to know the stance, before you get kicking and punching.

One basic concept all beginners learn is the stance. Your stance is everything, it is the very foundation all kung fu moves are built upon, be it blocking or kicking. After the stance, we move on to familiarize ourselves with the kicks, blows, strikes and blocks.

This stance is where all beginners start from. To go into this position, you have to set your feet wider than your shoulder width, your toes are pointed forwards, then you squat. Your knees must be bent and it should be slightly higher than 90 degrees. This stance is to test your mental fortitude. You may be asked to hold the position for an hour before any formal training by the monks, it isn’t torture, well kinda, but it is done to test if you really have the mental fortitude for the training and practice of Kung fu. It is also used to train the leg to have long stamina.

This stance is done by leaning on your back leg with the knee bent, then you bring one hand to your chest and the other hand above your head with the arm straight.

This stance is done by standing on one leg with the other leg held in the air with the knee bent. Its emphasis is on balancing.

This position is a very complex one, as you have to cross one leg over the other and squat.

Now that we have a basic understanding of the stances of shaolin kung fu, let’s go into the conditioning.

“The fist is the source of all arts and the leg is the base, the root of the fist” Hence, shaolin monks go through thirty percent of fist training and seventy percent of leg training. The shaolin monks run up and down the ancient stone stairways of the temple on all fours every morning. Situps and knuckle push ups. Several hours are spent on practice to keep the body in excellent and prime condition.

This is accomplished through continuous drills and exercises. Hours and hours are put into this training.

One of the best exercises for strength is the tree hugging. It is a traditional method of exercise. Most shaolin monks start out when they’re young. They are each given a sapling and are asked to uproot it by hugging it. Day by day, the sapling gets bigger until it becomes a strong tree, the monk too has grown in strength from trying over the years to pull its roots out by hugging it.
The strength gained now spreads to the four limbs and makes you in command of unlimited power and you can move things 10 times your bodyweight.

Let’s go a bit into combat techniques. You’re eager, aren’t you? Good! So are we.Its quite wonderful to have amazing learners. Okay, the shaolin monks believe in using the techniques of animals as a combat style.

The shaolin monks hold five animals in high regard and as such their technique has closely been studied and adapted into combat styles. They are the snake, crane, tiger, leopard and Dragon. They are all a little hard to practice as a beginner, but you’ll survive.

Snake Hand: This is done by extending all four fingers to act like a spear, it acts as turning defense to offense and offense to defense. How? By raising up your hands, you block your opponent’s strikes, then with that same hand you reach out and strike out at them in vital areas. Raise your hand like the snake’s head, then relax it a bit and then with lightning speed shoot it out and take it back. Let’s do this: Raise, relax, Strike! Raise, relax, Strike! Very good.

Crane Strike: This style emulates the crane in its grreat capability of striking with its beak while still keeping balance on a single leg.

Leopard Fist: This makes use of your hands to form a fist like a leapard fist which results in a strong and extremely effective fist. it is mainly used to strike the neck, temple, chin, spine and between the ribs .

Tiger Claw: For the Chinese, the Tiger is the king of the beast. To become a Tiger you have to train yourself with push-ups, sit-ups and sparring. The claws are formed with your fist and can tear up muscles in the arm, leg and body of your opponents. It is used both as a defense and offense weapon.

Dragon Fist: The dragon fist is formed like the Tiger claw. It makes use of the thumb and fingers like a tiger claw, but the fingers are bent less and the palm is flatter. This is used to grab, pull, and throw your opponent to the ground. This mode of fighting is fearless, strong and calm.

Now don’t forget it’s not just about getting the body to fight, it’s about discipline, character, tests and mental fortitude. Oh! One last tip from us, shave all the hair on your head, that will give you the matching looks.