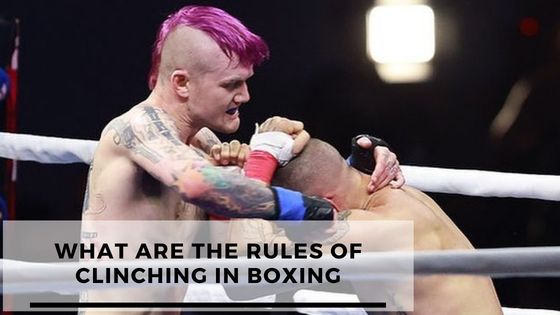 Whether you are a new or old follower of boxing fights, you would have realised and noticed the repetitive “hugs” between fighters within rounds.

For a sport that requires each fighter to try to outpunch the other fighter, this could come across as particularly odd, especially when you consider the frequency of it.

Well, such “hugs” are generally referred to as clinches, and in this article, we’ll be taking a look at what clinching is about, and some of the rules surrounding it.

Clinching is a situation or move that occurs in a fight when one fighter grabs the arms or holds the body of his opponent.

Given the violent nature of boxing, clinching has often been labelled as a “defensive technique”, with a lot of boxing fans very critical of the move.

Some say it makes the fights boring, or it slows down the pace of fights, but whatever the reason, a large percentage of boxers still do it.

Imagine you were getting punched really hard in the face, and you could slowly feel your legs give way from under you, the most logical move would be to clinch and get some form of respite, wouldn’t it?

Well, that’s one of the reasons clinching is so popular.

This might seem contradictory, but clinching is used by taller fighters to create the necessary distance.

If for example, a shorter fighter closes the distance and begins to land punches on the inside, the taller fighter could clinch.

When this happens, the referee is required to intervene and create distance between the fighters.

This is mainly used by the heavyweights, with someone like Tyson Fury for instance.

Because he’s bigger than most fighters he would come against, he could clinch and rest his entire weight on the person, thereby causing the opponent to be fatigued.

Now that we know why boxers clinch, it would be of importance to briefly discuss some of the rules governing It.

Like many other facets of boxing, there are rules governing clinching in fights, but unfortunately, there is probably none that’s as vague.

During a clinch situation, the referee is given the power to separate the fighters, in which they are to take at least one step back before engaging with each other again.

The referee is also allowed the discretion to instruct the fighters on whether they’re to box their way out of the clinch situation.

While punishments for clinch situations in real-world situations are few and far between.

When a fighter clinches too much or refuses to release his opponent after the referee tells him to, the referee has the authority to penalize the fighter for a foul.

But as earlier stated, this is something that is very rarely done in the real world.

The topic of clinching is a very controversial one in boxing, because of the perceived disadvantages it gives the sport, and yes when it is overdone.

It could slow down the pace of fights massively and make it boring, but given how much the top-level boxers use it to overcome their opponents, it is certainly something that is here to stay.