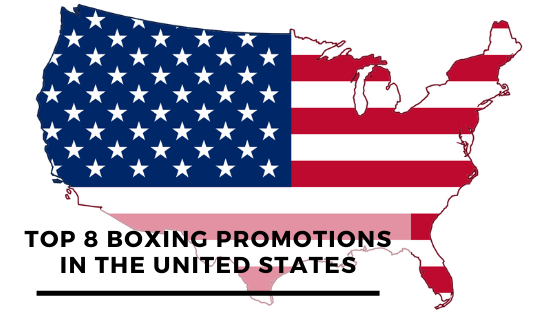 Boxing is one of the most popular sports in the world and by far the biggest among combat sports.

Dating back to as early as 2000 BC, boxing is nearly as old as mankind and has remained relevant, evolving into a massive global sport.

Today, the brains behind the sport are the organizations referred to as promoters.

They scout and recruit boxers, arrange matches, publicize them and advertise their fights.

They are responsible for setting up the boxing matches; they arrange negotiations between fighters, venues, TV rights, marketing, ticket sales, and personnel.

And they provide funding for all of it.

Promoters handle the business aspect of boxing and allow fighters to focus on actual boxing.

Home to some of boxing’s biggest names, and biggest fights, the US is not lacking in boxing promotions for a rising boxer.

Although you can have a career without signing with an organization, it is rather advisable to get one.

They can play a crucial role in projecting your career positively.

In this article, we discuss the 8 best boxing promotions in the USA.

This list focuses on their popularity based on social media influence, and their resume of big-name fighters and boxing events.

Based in LA, California, Golden Boy was founded in 2002 by the boxing Hall of Famer Oscar De la Hoya.

Built around the success of the 10- time world champion, Golden Boy is one of the biggest and most respected boxing organizations, not only in the US but globally.

Golden boy promoted the pay-per-view record-breaking fight between De La Hoya and Mayweather and teamed up with Top Rank to host Pacquaio vs De La Hoya.

They have the biggest social media reach, commanding the highest number of followers across the major social media platforms of Instagram, Twitter, and Facebook, with 1.2M, 525k, and 2M respectively.

Top Rank has been on the global scene since 1973, headed by Bob Arum who is also a co-founder.

Bob Arum in the last half-century, has become a name synonymous with the sport of boxing.

He and Top Rank are arguably the biggest names in boxing promotion.

They set up Ali vs Fraizer, Holyfield vs Foreman, and Hagler vs Hearns among many other legendary fights.

Top rank has the best promotional resume, having promoted some of boxing’s best fighters and events.

Triller fight club is a subsidiary of the Triller company (social media app).

Though they are new to the sport of boxing and learning on the job.

Triller has a huge social media following, adequate funding, and clout from arranging fights between celebrities.

Triller Fight Club in its early stages seemed to focus more on generating attention by giving popular names a chance to box without actually getting involved in the boxing industry.

Names like retired UFC champions Anderson Silva, Tito Ortiz, Frank Mir, and Tyron Woodley have all fought under the promotion.

Their foray into championship boxing didn’t do so well, failing to seal a title unification bout between George Kambosas, and Teofimo Lopez.

DiBella is based in New York and was founded by experienced boxing promoter and TV producer Lou DiBella.

Other female fighters include Heather Hardy and Raquel Miller.

TGB is an establishment of the late boxing Hall of Famer Dan Goossen.

Goossen was and will remain an iconic boxing promoter.

Under him, TGB stayed at the top from the 1980s to his demise, since which Tom Brown has efficiently taken over.

TGB has promoted some of boxing’s legendary names in the past.

Based in Nashville, Tri-star is committed to promoting boxing and fighters across Tennessee.

They are new to the business but have shown steady consistency, organizing 26 events since their debut on December 8, 2021.

The focus is on promoting grassroots boxing at a high level, grooming and promoting homegrown fighters, many of whom may become the next big thing.

IGNITE promotions is based in Minneapolis, Minnesota, and has been around the boxing scene since 2009.

IGNITE also hosts MMA, muay Thai, and grappling events, and sometimes these events are a mixture of all these fighting disciplines.

They promote events across the upper-midwest.

IGNITE has its biggest audience on Facebook with 11k followers.

Airtight is a small Colorado-based promotion that promotes fighters, and boxing, MMA, and grappling events.

Airtight has minimal social media presence, relying on Facebook as its outlet.

They have 3k followers on the platform.