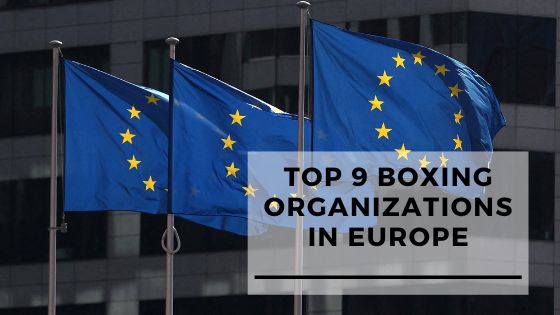 Let’s take a look at the 9 best boxing organizations in Europe.

The Belgian Boxing Federation is a state-of-the-art federation that represents Belgian boxing.

The BBF seeks to create a high-performance environment in order to foster the best Belgian boxers possible.

Their holistic approach also aims to promote the sport of boxing locally and internationally as well.

The numbers reflect the progress as Belgium now has 136 boxing clubs, 5 976 members, 284 coaches and hosts over 80 matches annually.

As one of the oldest boxing organizations, GBA has taken the responsibility of developing amateur boxing in Germany.

Fighters are given training programs that give them the best opportunity to realize their boxing potential.

The GBA is the chief organizer of the German national championships.

Bund Deutscher Berufsboxer is Germany’s association of professional boxers. Founded in 1949, BDB’s mission has been to represent professional boxing with the utmost respect.

As a promotion, BDB hosts over 20 events annually in different parts of Germany. People also have the opportunity to submit their boxing events to BDB.

Pro Boxing Team Finland is the leading boxing promoter in Finland. Led by one of Finland’s finest boxers Juho Tolpppola, the promotion is home to the finest local boxing talent.

An example of such is Samuli Karkkainen, a cruiserweight with a 14-1 professional record.

To help grow the sport of boxing, they have recently partnered with Probellum-a boxing promoter- to host a number of boxing events.

Over the years, they will look to add high-level boxers to their roster

The history of Czech boxing dates all the way back to the early 1900s, with Joe Jahelka being the first notable boxer to come out of the nation.

The development of Czech boxing would escalate as the CUPB would later be formed in 1921.

Since its formation, CUPB has established a strong history of Czech Olympic success, with over 5 Olympic boxing medalists.

While it was historically focused on amateur boxing, it has now shifted to professional boxing.

The organization was created with the purpose of unifying the efforts of professional boxing in Spain.

AEBOX takes a holistic approach in its decision-making and operation as a promoter and organization.

It looks to protect its fighters by ensuring that their best interest is always taken care of.

Founded on February 15, 1903. The French boxing federation is one of the most historically significant boxing organizations in whole of Europe.

French boxing grew in popularity in the 19th century, making waves around Europe as a rising form of combat.

Western boxing used Marquess of Queensbury rules, which differed from French boxing in that it prohibited the use of kicks in combat and many other things.

These students would host Western boxing matches between fighters of various nations.

It eventually grew as they formed the French Federation of Boxing Societies, which later became the French Boxing Federation that we know today.

Their professional success shouldn’t go unnoticed, with a plethora of former world champions and the success of current WBA Cruiserweight Champion, Arsene Goulamirian. While France may not be primarily known for boxing, the French Boxing Federation is working hard to change that.

An anomaly to the list. King of Kings is one of the world’s leading kickboxing promotions.

K is an acronym that stands for kickboxing, karate, k-1, kung fu, judo, boxing, taekwondo, MMA and all the forms of fighting that are allowed in the competition.

King of Kings also refers to the best in the world.

KOK hosts roughly 10 events during the year, in tournament style, with a winner being crowned at every event.

The main weight divisions are:

KOK continues to grow as they gain new sponsors on a regular basis, and I wouldn’t be too surprised to see them among the top promotions of MMA.

The sport of boxing gained popularity among Italians during the early 1900s. Italy’s first champion, Pietro Boine was key, leading the Italian Boxing Federation as he opened the first official gym in 1912.

The IBF was officially formed in March 1916.