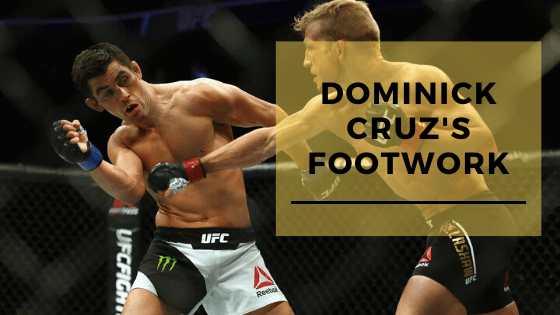 Dominick “The Dominator” Cruz has a reputation for being a master of footwork. There’s a reason why he is, statistically, the least hit fighter in his division.

Not only does his footwork help him evade his opponent’s attacks, but it helps him set up his own. If you want to fight like Dominick Cruz, spend some time perfecting your footwork.

One of the simplest things we can learn from Dominick Cruz when it comes to footwork is the importance of moving side-to-side and not just forward and back. A lot of Cruz’s success comes from how he opens up new angles, even blindsiding his opponents, through lateral movement.

To the untrained eye, it may look like Cruz is just hopping around. But in an interview he gave, Cruz made it clear that his footwork has developed out of a well-thought-through system. Cruz has six to ten patterns of footwork that he’s repeating in his fights over and over.

So to the detractors out there, there is a method to his madness. Depending on his opponent, he can switch up the patterns as needed.

In this article, we’ll break down some of Cruz’s best footwork techniques as well as provide step-by-step guidance on how to use footwork like “The Dominator”. While most of these techniques first look like defensive moves, you’ll be surprised at how many attacks lead from well-executed footwork. 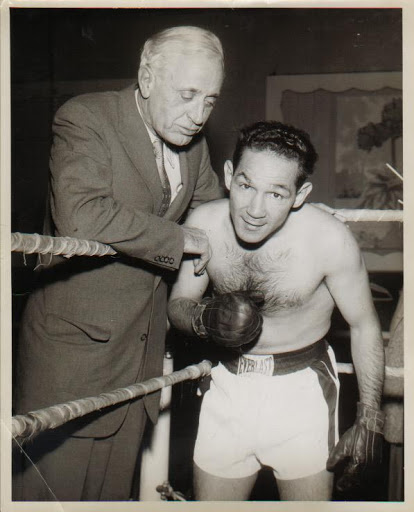 Cruz often cites Willie Pep as the inspiration for his next-level footwork. Willie Pep was the World Featherweight Champion in boxing whose career spanned almost 30 years between 1937 and 1966. Willie Pep was renowned for his footwork, as well as switching stances, just like Cruz.

Pep knew that by switching stances, he was able to create an angle merely by stepping to his right or left. With this new angle, all he had to do was jab down the center, as we see him executing beautifully in this clip. (Pep’s in the black trunks.)

Here’s a list of the particular footwork techniques that have helped Dominick Cruz gain his reputation as the fighter with some of the best footwork in the game:

You’ll often see Cruz sidestep, switch into southpaw then shuffle forward to create a better angle of attack. For example, we saw him switch stance, shuffle, then throw a big left hook followed by a cross and a left high kick against Ian McCall.

To perform this switch and shuffle from an orthodox stance, first of all, step to your right with your right leg and follow with your left. Now you’ll be in a southpaw stance and you want to shuffle forward and throw your first attack. Try to create at least a 90-degree angle to your opponent. This will open up space and you’ll potentially blindside them.

One of Cruz’s favorite foot movements, and most successful, is definitely the dart. We often see Cruz dart in with a cross, crouch again to avoid any counters, then circle out to create a better angle. We also see him dart in with a cross and shoot for a double-leg takedown, as we see in this clip.

To perform a dart, first, throw a straight or a jab to draw a reaction from your opponent. Then, in a crouched position, you can use your forward momentum by pushing off your back foot. Using this forward momentum, plus your opponent’s poor balance, you can circle, or dart, inside, throwing more attacks or shooting for a double.

Practicing and perfecting the dart manoeuvrer will not only help you increase your percentages, but it will also increase the variety of takedowns. Not only does the dart create space, but it generates a lot of momentum as well as throwing your opponent off balance.

You’ll also see Cruz use the dart to escape being cornered as well as to get back into the center of the cage. Darts can help you control the pace of the fight and control and dominate the ring. If you want to fight like Cruz, work on your darts.

Another technique to perfect if you want to move your feet like Dominick Cruz is the pivot. You’ll see Cruz pivot to the left and to the right in order to evade, as well as to create better attacking angles. We saw him employ the pivot to great success in his fight against Urijah Faber.

To perform a quarter pivot, start with a turn-in of your lead foot, standing up the ball of your foot, then swing your back foot around. Try not to cross your feet by stepping with your back foot first. If you’re hit with crossed feet, you’ll be severely off-balance.

Furthermore, move one foot at a time. This means you’ll always have one foot on the ground, ready to hold your weight in case your opponent starts throwing shots while you pivot.
Cruz often crouches while pivoting. This further helps him dodge any punch coming his way.

By crouching and circling, or pivoting out, Cruz is able to create much better angles, even blindsiding his opponents. If you want to use footwork like Dominick Cruz, work on your pivots.

Shifting is one of Dominick Cruz’s favorite footwork techniques. Essentially, you shift by stepping into your opposite stance as your opponent throws a punch. You can also think of it as walking with your punches.

You can also mix in kicks with your shifts, making them even more effective. One of Dominick Cruz’s favorite moves is the left high kick followed by a forward leap with a right hand into an orthodox stance, as seen in this clip.

The double stance switch makes it extremely hard for your opponent to read your moves and guess what’s coming next. One of Cruz’s biggest advantages over his opponents is the fact that his footwork, and in this case his shifts, always keeps them guessing.

When you’re shifting, it’s important to move your hands. You’ll see Cruz often move his hands in an arching motion as he shifts. This helps him maintain his balance. Also, try to keep your feet as low to the ground as you can without sliding. This will increase your efficiency as well as your speed.

Perhaps one of the simplest of Cruz’s techniques is the backpedal, otherwise known as walking backward. While it might not be the most popular with fans, who often think you’re running away from your opponent, it is a reliable way to avoid getting hit.

Backpedaling also helps Cruz maintain ring control. While a lot of people think you have to move forward to control the fight, you may very well be moving forward into your opponent’s shots.

Control comes from who is initiating the pace and who dictates it throughout the fight and Cruz often maintains control by moving backward as well as forward.

As defensive footwork goes, nothing is more simple and effective than Cruz’s step off, sometimes called the Ali Step. In this clip, we see Cruz steps off left to avoid the jab then step off right to avoid the cross.

To perform a step off, all you have to do is step to the side as your opponent throws a strike. After you step, pivots to square back up.

Not only does stepping off help you avoid punches, but it helps create new angles for you to attack.

So, if you’re trying to move your feet like Cruz, practice the simple step off. Try to remember to practice stepping off to the right and to the left.

So there we have it. Hopefully, by now you have a better idea of why Dominick Cruz dominates his opponents by using next-level footwork.

A good way to improve your footwork is to drill each technique in isolation then combine multiple techniques in sparring or live fighting.

Combining shuffles, darts, pivots, shifts, backpedals, and step offs will not only help you up your defense game, but you’ll soon see an improvement in your offense as you create new angles for striking and takedowns.

Combine these techniques and you’ll be dominating your opponents like Dominick “The Dominator” Cruz.