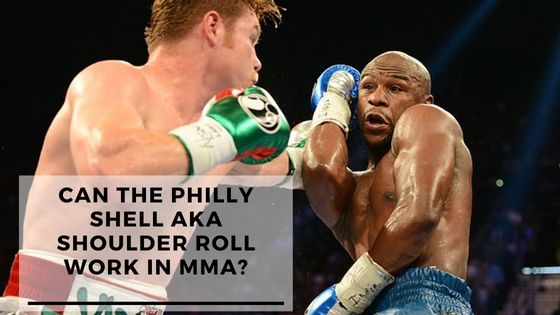 What is the Philly shell aka shoulder roll?

The Philly shell is a defensive mechanism that allows a fighter to guard against punches from an opponent and create a chance to counterattack.

This style is pretty old and has been in use for decades.

The Philly Shell, or Shoulder Roll Guard, is an effective counter-punching defensive method.

When you talk about the Philly shell, you definitely have to mention one key and prominent fighter, Floyd Mayweather Jr. Floyd.

He was known to have made the Philly shell more popular in modern boxing.

Does the Philly Shell work in MMA?

Despite the fact that the constant change and wide variety of techniques in MMA make this style less effective for fighters, skilled and experienced fighters who have properly mastered the style can effectively put it to use.

The Philly shell is one among many other defensive styles in MMA.

Unlike boxing, the Philly shell technique cannot be solely used by fighters throughout a fight.

Attacks may come from different dimensions and in different forms (kicking, punching, etc.), making it difficult for a fighter to use just this style all the way through a fight. There has to be a switch at some point.

How does Philly shell work in MMA?

In simple terms, both arms are placed on the torso between the belly button and the chest.

The lead hand is placed down on the abdomen, while the rear hand is right up around the chest region below the chin.

The arms and shoulders are used to defend against attack by the opponent, the lead hand protects the body while the rear protects the head.

One of its weaknesses is that it makes a fighter more susceptible to leg and head kicks.