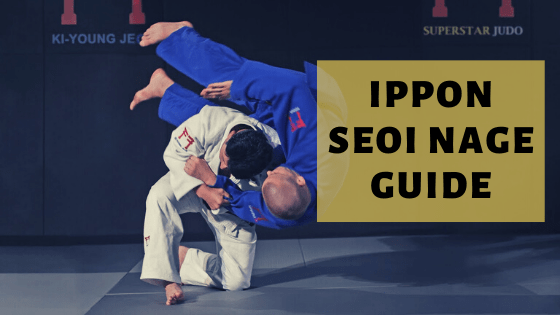 Ippon seoi nage, one armed shoulder throw, is one of the most impressive throws in judo. Since its invention in Japan many martial arts have added this technique to their arsenal, Brazilian Jiu Jitsu, Krav Maga and even MMA.
In this article, you will learn how to do Ippon seoi nage with all its variations.

How to do Ippon seoi nage? (Step-by-step guide)

There are different variations of Ippon seoi nage. In this section, we will demonstrate the most basic way to do this technique, then we will get to the other variations once you have mastered the basics.

1. Break your opponent’s balance by putting them on their toes

Don’t ever try to initiate a throw without setting it up by breaking your opponent’s balance.

The key here is to never attempt an ippon seoi nage on a flat-footed opponent, this is a big no-no! Start by putting them on their toes by pulling forward.

2. Establish your grip (Also known as Kumi Kata in Judo)

In this tutorial, we will assume that you want to throw your opponent by using their right arm, so all instructions will be according to this assumption.

Now, how to establish your grip for Ippon seoi nage?

Both your feet are parallel to your opponent’s feet, now step with your right foot towards their right foot.

Now that you have stepped in with your foot, you must elevate your opponent in order for you to get under them.

Use the grip you have on their right elbow and lift their elbow up, the arm will follow and their armpit will be exposed.

If you lift your opponent’s arm up along with executing the first step which is pulling them forward and putting them on their toes, your opponent will be off-balance and all set to be thrown.

5. Get under their arm

It’s time to get in full contact against your opponent’s body:

Now, it’s time to make the turn and face the same direction as your opponent:

The hard part is done! Now all you have to do is to finalize the throw which is the easy and fun part:

Sometimes you see judo players dropping on their knees to finalize the throw, this technique has a high success ratio, that’s why many high-level judo players use it.

Also, a part of its success is due to the fact that it prevents the opponent from countering with a throw of their own.

How to do a knee-drop Ippon seoi nage?

When dropping on your knees don’t flop and drop, instead, use a corkscrew motion and spin under your opponent.

When dropping on your knees, make sure to go knee by knee in order to avoid injuring your knees especially while drilling.

2. Knees inside your opponent’s feet

Don’t spread your knees, keep them tight between your opponent’s legs. 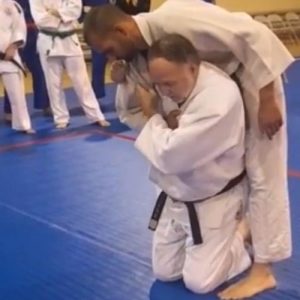 When you are on your knees your feet should not be flat on the insteps, instead, they should be standing on the ball. This is the mechanism that will help you push against the ground without slipping. 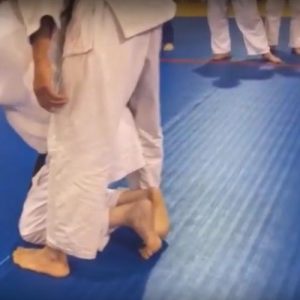 Do not drop while your body is still away from your opponent, make your turn first and stick your back against your opponent’s body, once this position is secured, get on your knees.

Now that you have made the necessary prerequisite steps you can finalize the throw:

Capitalize on your throw

Depending on the rules you are playing under you can:

In order to master the throw, you should drill it constantly hundreds of times until it becomes second nature. Your goal is to achieve a mastery level where you are not thinking about the steps of the technique, it should come out naturally.

Now that you have mastered the concept behind this throw, let’s get to the different variations of Ippon seoi nage

Many beginners ask the question: What is the difference between Ippon seoi nage and Seoi nage?
The answer is: 99% of the time when a judo practitioner says Seoi nage they mean Ippon seoi nage.

Ippon Seoi nage means one armed shoulder throw, so this is the full name of the throw. But due to the length of the appellation, the majority of judo practitioners just use the short version “Seoi nage”.

There are other judo techniques finishing with “seoi nage” such as Morote seoi nage which means two armed shoulder throw. But when judo players want to shorten the name of this throw they use the term “Morote” not “seoi nage”.

To sum it up for you, when you hear seoi nage from a judo practitioner, it is the same as Ippon seoi nage.

Other names for Ippon seoi nage

How to avoid getting your back taken when doing Ippon seoi nage?

One of the biggest problems with Ippon seoi nage especially in Brazilian Jiu Jitsu and MMA is that it has high risks of getting your back taken by your opponent and therefore getting choked.

Do not attempt a classic Ippon seoi nage -Like the one we broke down at the beginning of this article- against a high level brazilian jiu jitsu practitioner.

BJJ practitioners develop an automatic instinct of taking the back wherever they see a glimpse of an opportunity. Instead, go for a variation of Ippon seoi nage where you trap your opponent’s arm and pin your opponent’s shoulder once you hit the mat.

Judo master Kathy Hubble has done a great job of explaining this variation, watch and enjoy!

How to do Ippon Seoi Nage Without Having Your Back Taken