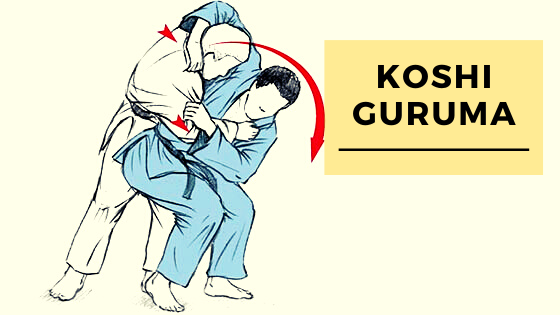 Koshi guruma is a throwing technique in judo, it belongs to the Koshi waza group, hip throws.

Koshi guruma has a high success rate in judo, it is also very effective in no-gi grappling and MMA.

One of the biggest advantages of Koshi guruma is that you end up in a perfect Kesa-gatame, which is a very dominant position in side control.

In this article, you will learn how to do Koshi guruma in a step-by-step guide.

How to do Koshi guruma (step-by-step guide)

The main grip for Koshi guruma is the headlock, you have to take full control of the head and use it for the throw, remember, wherever the head goes the body follows.

Now what to do with the other hand?

For Koshi guruma, there are two ways to grip with the other hand:

A. Grip the lapel.

B. Grip the sleeve

Both grips are valid and are very effective, so use whatever grip that presents itself to you in the match.

Koshi guruma is all about entry, its biggest challenge is to enter into the opponent’s grappling range and skip their defenses and wrap one arm around their neck. This is no easy task, you have to be slick and tricky.

When you are in a standard Kumi kata with your opponent, it becomes very difficult to bypass their arms and wrap your arm around their neck.

What is the best entry?

There are two great entries for Koshi guruma:

A. Enter with no prior grip

The best Koshi guruma throws you will see high-level judokas executing successfully in competition are the ones where they come from outside without any prior grip walking towards the opponent as if they are just about to establish a standard Kumi kata, then once they enter in the opponent’s grappling range, they jump on the neck with a sudden and explosive move and initiate the throw.

What’s beautiful about these two throws is that they are the opposite of each other, and therefore they complete each other.

If you don’t know how to do O goshi, there is a full step-by-step guide that we have dedicated to it. Take a look here.

The grip for O goshi is as follows:

The grip for Koshi guruma:

How to combine them?

Remember, the goal here is to enter into the opponent’s grappling range, bypass their arm’s defense and wrap your arm around their neck.

The trick here is to fake an O goshi then go for Koshi guruma. Do a feint with your arm as if you want to go under your opponent’s armpit, do it once or twice until you create a pattern in your opponent’s head and make them believe that your next move is going to be O goshi.

Your opponent will be ready to prevent you from going under their armpit, once you feel that you have hypnotized them, make a sudden and explosive move and go over their shoulder, then wrap your arm around their neck.

Note that you can also do the opposite thing and fake going up for Koshi guruma then go down for O goshi. This combination can go both ways.

Supposing that you are going to wrap your opponent’s neck with your right arm:

1. Take a step with your right foot and place it between your opponent’s feet

3. Pivot on your right foot and turn to face the same direction your opponent is facing. You have to do a 180° turn.

4. Take a step with your left foot to join your right foot. You are free to place it wherever you feel comfortable. The essential thing is to use it as a pushing mechanism for the throw.

Your hips must be glued to your opponent’s hips, there should be no space in between.

If you try to toss your opponent with your hips away from their hips, chances are that your throw won’t be a success.

Your opponent’s body must become an extension of your own body in order for you to manipulate it and have full control over it.

Bend your knees slightly and lower your hips’ level.

The knee bending will help you activate your quadriceps and glutes for the throw.

Now is the time for the final part of the throw, the lift, and the toss.

A. Lift your opponent on your back by pulling their head forward

This is a critical step that many judo students miss.

We have agreed in step 3 that you have to step in and pivot 180° until you face the same direction your opponent is facing.

Now for this step, you have to pivot again another 180°, so in total, you are going to do 360° for the whole throw. That is why it is called the corkscrew motion.

If at the beginning of the throw you were facing north, you have to end up facing north when you are on the ground.

This is the beauty of Koshi guruma, it always ends in a dominant position in side control, Kesa-Gatame.

Once you are in Kesa-Gatame, you will have multiple options to transition to any submission you want. There are plenty of submissions that you can do from this dominant hold.