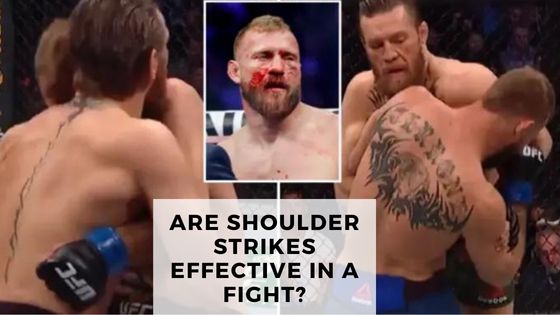 Shoulder strikes are typically seen as a secondary tool and not the main blow to win you a fight.

Yes, we have all seen the fight where Connor Mcgregor stunned Cerrone with a wild shoulder strike, bursting his nose and winning 49 seconds later, but this was an exception to the rule, which is ‘the shoulder strike is a setup strike, not a finishing strike‘.

Shoulder strikes are just like stomping on someone’s toes. You employ it to force your adversary to move, make them uncomfortable, or wear them down. But it is very unlikely to win the fight for you.

It can be used by the shorter fighter in the clinch to maximize the little space and incentivize an opponent to come within your control.

Connor Mcgregor is not the only person to use it. Jon Jones is a frequent user of standing clinch shoulder strikes and has used them against numerous opponents, including Daniel Cormier and Rashad Evans.

The problem of shoulder strikes

In Muay Thai, shoulder strikes are legal, but it is very rare for people to use them. Some say it is because of its aesthetics.

A shoulder strike can be formed from a Thai clinch, though not a lot of fighters use it.

If you take a close look at the Cerrone and Mcgregor fight, you will see that Cerrone did not use the proper technique, and it seems that McGregor was aware of this, so he winded the strike while Cerrone was probably thinking too much about the elbow and didn’t think about the shoulder.

Are shoulder strikes used in boxing?

According to boxing rules, it is illegal to strike someone with the shoulder.

However, in boxing, what they have is a shoulder roll also known as the Phily shell.

Floyd Mayweather Jr. is well known for using this defense technique against his opponents.

The shoulder roll in boxing uses the shoulder to deflect punches while using the rear hand to parry punches coming from the opposite side.