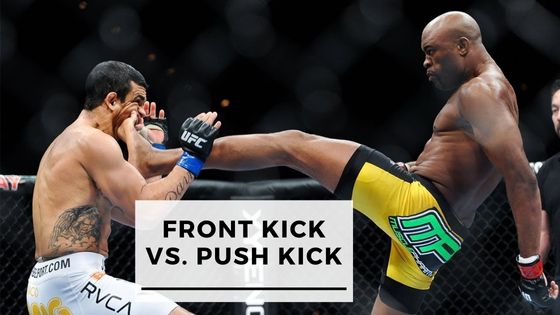 If you are into the martial arts world, you have probably heard about the front kick and the push kick or Muay Thai teep. Both movements seem similar at first sight, so most people think that they are the same thing.

Taking a closer look you can easily realize that they are not the same, they have some differences that make them work differently, and be useful in different situations.

As the name suggests, this movement involves lifting the knee straight forward and then releasing the kick in a completely frontal line.

It’s recommended to retract the leg immediately after the kick (snap), to avoid a grapple from the opponent

The goal is to strike with the ball of the foot (the ball will make more damage).

Because of the natural height of the knee, the front kick targets regularly the chin or the solar plexus.

The front kick can also be a useful defensive asset. When the opponent starts an attack with a high guard, you can use this kick to target the solar plexus and create some distance while creating some damage.

Also known as the Muay Thai teep, or just ‘teep’, the push kick is a technique that looks similar to the front kick because of its execution but has a different goal.

The teep is a defensive technique used when the opponent gets too close. So you lift your knee and push them with the ball or the whole sole of the foot.

With a front kick, you want to make a fast attack, releasing and retracting your leg quickly, while trying to stay in your place and not moving too much forward.

Meanwhile, with a push kick you want to make longer contact with the opponent’s body, moving a lot more forward to make them change their stance and move backward as much as possible, so you can create the distance you need to recover.

Although it does make some damage, a teep doesn’t work that well as an offensive technique. It does work to transition into an offensive position.