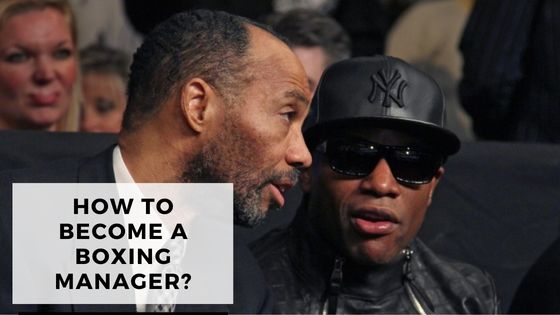 A boxing manager is a positive and important aspect to any up-and-comer fighter out there. They are also an integral part of a fighter’s growth as a human and as a champion after that.

Are they needed? Yes, damn right they are. To become a boxer’s or fighter’s manager, you would need to have general knowledge of actual boxing itself.

You would also need to have an idea of how to operate within a boxing environment or boxing gym and also have the know-how on how to successfully develop a boxer. Sounds easy, right?

a. Undertaking a sports fitness and business course or having some idea of business management would be beneficial.

b. Thick skin is also a necessity.

c. Boxing managers are also massive inspirations to their fighters. They are tokens of hope whenever their fighter (for whatever reason) stops believing in themselves.

3. So, How do I Become a Boxing Manager?

A boxing manager would need to know how to stand up for themselves. The world of boxing – if you don’t know this already – is ruthless and uncertain at times.

We can see that already in the cancelation of fights and breakdown of negotiations.

The talking is done through the managers themselves, and at the end of the day, the managers usually decide what is best for their fighters.

PS. Note that when a fighter reaches superstardom, they usually become their own boss simply based on value: If their persona is resonating with the public consistently, their value increases. It does not mean that they don’t need a manager – they absolutely do – it’s just that the weight on the manager’s shoulders is lowered considerably.

4. Communication skills are a must

Being a boxing manager falls down to whether or not you have good communication skills.

It might sound daunting, but it is also rewarding in itself.

As I have mentioned, experience in one-to-one encounters with boxers and basically listening to them is key. Interact with boxers in your gym or club and you’ll be surprised with how much you’ll learn. Join a gym and take it from there.

Unless your fighter is insanely gifted and you are incredibly lucky, it is usually a started-from-the-bottom storyline.

So you will need to be a source of patience to your fighter, you should be their ultimate fan who believes in them, if you take them just as another client, you won’t go far with this profession.