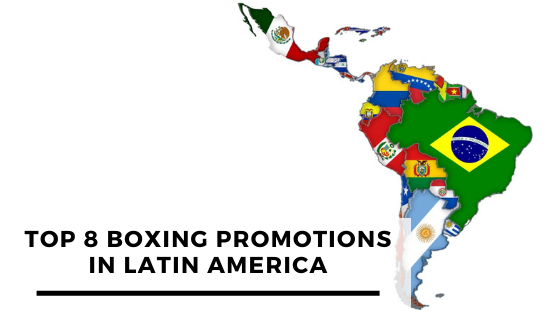 Latin America has always been the home to some of the world’s best boxing talents.

From Roberto Duran to Canelo Álvarez, some of the greatest boxers of all time have hailed from Latin America.

Here is a list of the 7 best boxing organizations in Latin America:

This article will look at the 7 best boxing organizations in Latin America based on their social media presence.

We will look at some interesting details about each promotion and what they bring to the table.

The Federación Argentina de Box, abbreviated as FAB, is the national governing body for the sport of boxing in Argentina.

The organization was founded in 1920, and it is based in Buenos Aires.

The FAB is the oldest boxing organization in Latin America, and it has produced some of the greatest boxers in history, such as Luis Ángel Firpo, Carlos Monzón, Nicolino Locche, and Oscar Bonavena.

The FAB has a strong social media presence, with over 30,000 followers on its Facebook page.

The organization frequently posts about upcoming events and news in Argentine boxing to more than 17000 followers on Instagram.

Arano Box is a Mexican boxing organization that was founded in 1989 by Mario Arano.

The organization is based in Junín, Buenos Aires, and it is one of the most successful boxing organizations in Latin America.

Arano Box has a strong social media presence with over 16,000 followers on its Facebook page.

Its Twitter handle only has a little over 1000 followers, while its Instagram page has less than 250 followers.

That said, Arano Box still posts interesting content on its social media platforms, such as photos and videos of training sessions, weigh-ins, and events.

Sampson Boxing is a Dominican Republic-based boxing organization that was founded in 1995 by Promoter Sampson Lewkowicz.

And it has promoted some of the biggest names in boxing, such as David “Bandera Roja” Benavídez, Jaison “Banana” Rosario, Javier “El Abejón” Fortuna, and John Riel Casimero.

Sampson Boxing has a strong social media presence with over 13,000 followers on its Twitter page.

The organization frequently posts about its boxers and upcoming events.

Bufalo Boxing Promotions holds most of its events in Managua, the capital of Nicaragua.

They are dedicated to helping local talent and have a strong commitment to working with Nicaraguan athletes.

The promotion had its first event in May 2019. Since then, they’ve had over 20 events and have shown no signs of slowing down.

Jibaros Boxing had its first event in 2020 in Tijuana.

They have had over 20 events in two years, with the latest being “GUERRA EN EL RING.”

They stream all their events live on Facebook for their 5000 followers to watch.

Jibaros Boxing posts updates and event information on Instagram, which has around 1000 followers.

OR Promotions is an old training gym that has been in the business of training champions since 1988.

They are based out of Buenos Ares, Argentina.

They are built on a strong commitment to providing the local athletes with the best possible training and resources.

OR Promotions has an Instagram page with over 2600 followers.

They hold multiple events every month.

In April, they had three events, all held in Santa Fe, Argentina.

Bxstars is relatively new and helps give upcoming talent a chance to shine.

They are based in Mexico City but have held events in different parts of Mexico.

The latest event they promoted was “Gatito vs. Habanerito” held on April 29th, in Tlaquepaque, Jalisco.

Bxstars has an Instagram page with over 1600 likes and a growing Twitter following which currently stands above 600 followers.

Since then, they have held over 50 events, with the latest being “Gonzalez vs. De Angel” which was held on April 29th in Santa Marta, Magdalena.

They have various weight divisions for men and women.

They use this platform to post updates about upcoming events and showcase promotional videos.