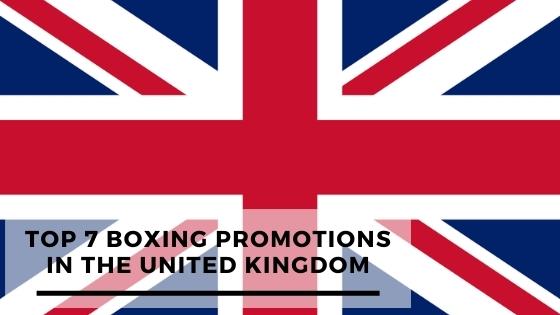 The UK is regarded as a home to boxing in many ways, having produced great names such as Lennox Lewis, Anthony Joshua, Tyson Fury, and Ricky Hatton.

Here, the sport is extremely popular, with nearly a million practitioners currently active.

The UK alongside the US, play a pivotal role in boxing’s relevance, setting up events, promoting fighters, and providing them with a platform.

This is only possible with the help of Boxing promotions and organizations.

In this article, we listed 7 of the best UK-based promotions, ranked according to industry relevance, and social media presence.

Founded by Barry Hearn in, and is now headed by his son Eddie.

Matchroom is right now regarded as the best boxing promotion in the United Kingdom.

Since 1987, Hearns through Matchroom boxing has been a major name in global boxing, representing most of the biggest names to fight out of the UK.

Matchroom has promoted legends such as Chris Eubank and Lennox Lewis.

Today, the rivalry between Eddie Hearns and Frank Warren of Queensberry Promotions is the lifeblood of British boxing, and Matchroom seems to have an edge with bigger names on their resume, as well as a considerably larger social media presence.

Founded and run by boxing Hall of Fame promoter Frank Warren, Queensberry has sat at the top of British boxing for the last 30 years.

Founded by Sam Kynoch in 2018, Kynoch is based in Glasgow, Scotland.

Kynoch boxing is the leading boxing promotion in Scotland, focusing on developing fighters, and grooming them through different stages of their careers while promoting events across the country.

They boast the largest gym in Scotland and have a good social media presence across Instagram, Twitter, and Facebook, with 12K, 5K, and 16K followers respectively.

Goodwin Boxing is an establishment by promoter Steve Goodwin.

Since its founding in 2017, the organization has been consistently active in grooming fighters and featuring them at the biggest events.

Some of the current fighters on their roster are Lewis Frimpong, Bradley Spencer, Lewis Syrett, Brad Pauls, Mark Little, and Jamie Smith.

Goodwin continues to maintain a good reputation in UK boxing and is continuously building popularity.

Dennis Hobson is an experienced and recognized promoter in the British and global boxing scene.

At Dennis Hobson, the focus is on identifying and maximizing the potential of boxers from across the world.

Established by promoter Mark Neilson, Neilson promotions is a growing organization that invested in promoting boxing events in Swindon, as well as managing budding fighters.

St. Andrews is a Glasgow-based promotion with deep roots in Scottish boxing.

For decades the club has hosted homegrown events and provides a platform for boxers to enter the global boxing scene.