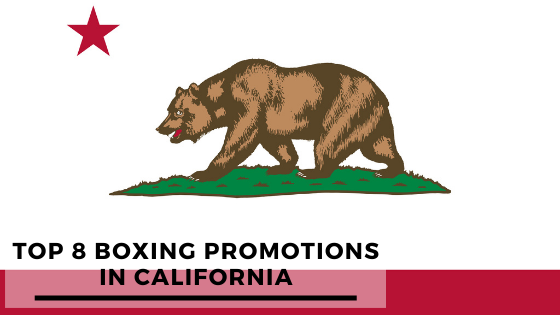 When it comes to hosting big boxing and MMA events, you can rarely do better than picking a location within California.

Whether it’s Los Angeles, San Francisco or San Diego, The Golden State has been previewed for some of the biggest boxing events of all time.

The Mayweather vs Ortiz fight and The Oscar De La Hoya vs Jimmi Bredahl fight are just but a few of the great fights that have graced this great city.

And when you realise that all-time boxing greats like Oscar Dr La Hoya, Shane Mosley, Manuel Ortiz, Andre Ward, Et Al came from California, your interest in the state is sure to increase.

So to this effect, we’re going to be looking at and ranking some of the top boxing promotions within California, and their mode of operations.

It’s only fitting that the number one on our list is the Golden boy promotions.

The promotion has gone on to host some of the biggest boxing events within and outside California, with a plethora of world stars coming through its ranks.

Fighters like Canelo Alvarez, Manny Pacquiao, Victor Ortiz, and Shane Mosley are a few of the notable alumni of the promotion.

You can get tickets to watch their events live by clicking on the link in their Instagram or Twitter bio, or you can stream them exclusively on DAZN.

With the kind of wave this promotion has been generating since its inception, it’ll be of little surprise if it becomes the number one boxing promotion in the world a few years from now.

The relatively new promotion aims to combine fighting with entertainment, and so far, it has managed to do that to a really good effect.

Global superstars like Jake Paul, Anderson Silva and Snoop Dogg, have all made appearances in the promotion.

You can catch their events by either subscribing to Fite, or by purchasing tickets from trillerfightclub.com.

Created in 2014 by Marvin Rodriguez, MarvNation has become a breeding ground for a host of new, talented, young, hungry fighters.

Over the years, the promotion has increasingly gained more international recognition, as it has spread its boxing events across the US, Mexico and Costa Rica.

Within their ranks are talented young boxers like Ashton Sylve, and Anthony Garnica.

You can purchase tickets to watch their events live  from www.MarvNation.com

Given how the golden boy promotions came to be, and now this.

You can clearly see there’s a trend between ex-boxing legends, and the tendency to start their own promotions.

As the name implies, this promotion was established by Roy Jones Jr, and Keith Veltre in 2013 with the aim of giving exciting young fighters a platform to prove themselves on the global stage.

This is made possible because of the partnership between the promotion and UFC fight pass.

This means you can stream their fights on UFC fight pass, from anywhere in the world, or you could purchase tickets to watch live events from their website at www.royjonesjrboxing.com.

Established in 2009 by Tom Loeffler, the promotion has gone on to hold over 30 boxing events, spanning 12 years.

You certainly know that you’re doing something right when UFC great Tony Ferguson, follows you on Instagram.

You can catch their fights live and exclusive on UFC fight pass, or click the link in their Instagram bio.

One of the oldest boxing promotions in California.

The Thompson boxing promotion was established in May 2000 with the view of breeding potential world champions.

Given its duration of operations, with respect to some of the others on this list, it’s shame that the promotion isn’t higher.

Since its inception, it has hosted close to 90 boxing events, with a further 22 slated to hold this year; with such a  level of output, it’s not difficult to understand how they made the list.

Tickets to watch their fights live are available on their website at www.socafights.com

The Last on our list of the top boxing promotions in California is TGB promotions.

Owned by Tom Brown, his excellent matchmaking abilities have been crucial in taking the promotion to the level it occupies today.

Such is the level of the competition present in the promotion that you can get to stream it live on Showtime Boxing, or you could get tickets to live events by clicking on the link on their Instagram page.

So, this is where we call it day for now; you could confidently argue that without the city of California and the promotions within it.

Boxing will not be at the level and stage it is today and it’s not difficult to see why given the number of fighters that have come through in the past.

And with more promotions still coming up in this great city, it can only mean positive things for the world of boxing.