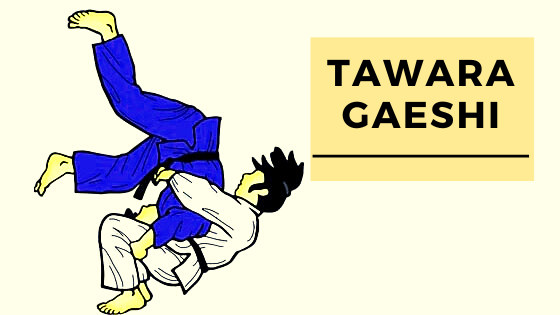 Tawara gaeshi is a throwing technique in judo, it belongs to the Ma sutemi group (rear sacrifice throws).

Tawara gaeshi has been created specifically to be a counter-attacking technique against  Morote gari (Double leg takedown).

Although Tawara gaeshi is not a banned technique, the International Judo Federation (IJF) has banned double leg takedowns since 2010. Therefore the situation of using Tawara gaeshi doesn’t occur anymore in competition under IJF rules.

With that being said, I still teach this technique to my students for self-defense. After all, judo is bigger than any organization, and useful techniques should never be put on the shelf.

Tawara gaeshi, can also be very useful in other martial arts such as Brazilian Jiu Jitsu, sambo, and wrestling.

How to do Tawara gaeshi (step-by-step guide)

1. Use it as a counter-attack

Tawara gaeshi is not a proactive throwing technique, it is a reactive technique that you use exclusively against a double leg takedown (Morote gari).

2. Use your opponent’s momentum against them

Tawara gaeshi relies heavily on momentum. You have to use your opponent’s momentum against them.

You have to wait until your opponent attempts a double leg takedown, once they shoot for your legs, use the momentum they have created to throw them backward.

Timing is everything when you want to counterattack. If you wait too long, your opponent might succeed in their double leg takedown and you might find yourself flying in the air wondering what happened.

On the other hand, if you try to counter too soon, your opponent might see the move coming a mile away which will give them a huge advantage over you.

The perfect moment to throw your Tawara gaeshi is when your opponent’s hands make contact with your legs, once you feel the contact go for the counter.

If you wait until your opponent wraps their arm around your thighs, it will be too late for you to counter.

Also, if you wait until your opponent gets fully under you, you will be at a huge disadvantage and you will be one step behind. Once your opponent controls your center of gravity, chances are that you are going for a ride.

4. Do a slight sprawl

Once your opponent shoots for a double leg takedown, make a slight sprawl. A sprawl is when you do a sudden explosive jump to move your legs backward in order to take them out of your opponent’s reach.

Don’t do a full sprawl as in wrestling, just move your legs slightly backward to prevent your opponent from wrapping their arms around your legs.

5. Wrap your arms around your opponent

Now lean with your upper body against your opponent’s back and wrap both your arms around their back.

Try to control as much as you can of your opponent’s upper body, the further you go towards their hips the more control you will have over their weight.

6. Place your feet under your opponent

Now is the time to be on the offensive, take a step or two towards your opponent, and place both your feet under them, the deeper you go the better it is.

Your Tawara gaeshi won’t be that effective if you try to throw your opponent with your feet away from their body. You must place your feet under their body to be able to control their body mass.

Now that you have set up the throw, it is time to toss your opponent backward.

Remember that Tawara gaeshi is a sacrifice throw, which means you have to sacrifice yourself by going first to the ground in order to make the throw successful.

The toss must be in that order:

A. Bend your knees slightly as if you want to squat, this will activate your glutes and quadriceps for the lift

B. Initiate the lift using your glutes and quadriceps. Many make the mistake of going on their back then trying to toss the opponent. If you do that, you will have no leverage and no strength for the lift.

C. Go on your back and throw your opponent backward. The path of the throw should emulate a suplex.

This variation of Tawara gaeshi is inspired by the butterfly guard used in Brazilian Jiu Jitsu.

Butterfly Tawara gaeshi doesn’t rely on using strength as in the classicTawara gaeshi (the one described above) instead, it relies on technique and momentum.

The butterfly guard in BJJ consists of placing both your feet inside your opponent’s thighs, which gives you full control over the opponent’s base.

By placing your feet inside their thighs and flaring your knees out, you will be capable of lifting your opponent’s legs off the ground just by extending your legs.

1. Once your opponent shoots their double leg takedown wrap your arms around their back,  place your feet between their legs then pull them backward.

2. Sit and place both your feet inside your opponent’s thighs.

3. Roll on your back and drag your opponent with you

4. Use your feet to lift your opponent’s leg off the ground. Extend your legs and throw your opponent backward.

5. Keep rolling until you end up on top of your opponent. Note that you have to keep your back round in order for the roll to be smooth. If you keep a flat back, the roll won’t be successful.

As a prerequisite to this variation, you must know how to do Uki waza.

If you don’t know how to do Uki waza, there is a step-by-step guide that we have dedicated to it. Take a look at it here.

3. Keep rolling until you end up on top of your opponent.

This variation is very powerful because it allows you to end up in a very dominant position, which is the mount.

As a prerequisite to this throw, you must first learn how to do Hikikomi gaeshi.

1. Once your opponent shoots a double leg takedown, place both your feet inside their legs, lean forward and wrap your arms around their back.

2. Now place one foot inside your opponent’s thigh.

3. Roll backward and use your foot to elevate your opponent

4. Keep rolling until you end up on top of your opponent

How To Do Sukui Nage: Step-by-Step Guide

How To Do Te Guruma: Step-by-Step Guide

The Difference Between O Goshi and Uki Goshi

How To Do A Fireman’s Carry Takedown – All Variations

How To Do Uchi Mata – All Variations

How To Do Ura Nage: Step-by-Step Guide

All Judo Throws For MMA & No Gi BJJ – Japanese Names

How To Do Ko Uchi Makikomi/Ko Uchi Gake

How To Do Ouchi Gaeshi: Step-by-Step Guide