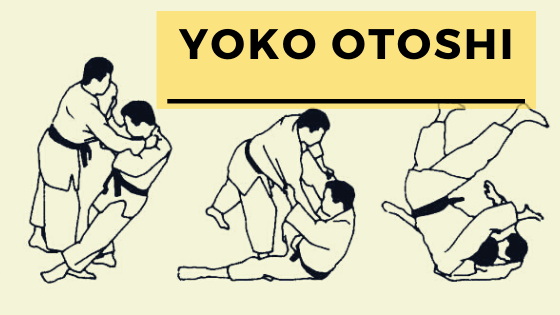 Yoko otoshi is a side sacrificing throw where you have to sacrifice your own balance to throw your opponent on the ground.

How to do Yoko otoshi (step-by-step guide)

Grip fighting is the first step of all judo throws, your goal must be getting the most dominant grip and giving your opponent the least dominant grip over you. That’s a very important battle.

Yoko otoshi can be executed from multiple grips -as you will see below in the chapter “variations of Yoko otoshi-. Here is the standard grip to use:

Judo is an art of deception, you must learn to program your opponent on one thing, then surprise them with something else, it’s called “creating patterns”.

Attempt one type of technique, twice or thrice until your opponent starts to believe that they have you figured out, once they start anticipating the same technique, go for another one and you will surprise them.

You have to be a multitasker judoka and do both things simultaneously, decyphering your opponent’s patterns and creating your own. That’s the difference between a high-level judoka and an average one.

The next step is to set up your opponent for Yoko otoshi by putting them slightly off-balance, this step in judo is called Kuzushi, it is used to set up almost all judo throws.

The goal of kuzushi is to put the opponent on their toes and make them lean slightly forward.

4. Direction of the throw

In order to execute a correct Yoko otoshi you have to understand which direction the throw must go to.

Yoko otoshi is a throw that goes to the side. Many beginners confuse it with Tani otoshi that goes backward or Uki waza that goes forward.
These three throws are very similar to each other, the biggest factor that differentiates them from each other is the direction.

5. Footwork is key for the throw

Now that you are fully aware of the direction of the throw, you must know that footwork is key to make your opponent go in the same direction the throw will go.

You can’t execute a Yoko otoshi if your opponent is pulling in the opposite direction, that is why you have to use footwork and “dance” with your opponent until you make them walk in the same direction you want them to walk to.

Don’t telegraph it by pulling only to one direction, if you are playing against a high-level judoka, they will see it coming from miles away. Mesmerize your opponent by going to all directions, sometimes pull, other times push, this will confuse them and prevent them from knowing your intents.

Another tip in the footwork game, don’t ever dance with your opponent with only one throw in mind, you shouldn’t do footwork with only one target.
You should always have two or three throws in mind ready to be executed whenever the occasion presents itself.
The three throws should have different directions and different mechanics and should be completing each other.

6. Sacrifice your balance and trip your opponent

Yoko otoshi is a sacrifice throw, it is not like other judo throws where you toss your opponent clean in the air and stay standing. You have to sacrifice your own balance to take your opponent’s balance away from them.

7. Keep control of your opponent

Once your opponent is down, don’t make the mistake of releasing them and losing control: