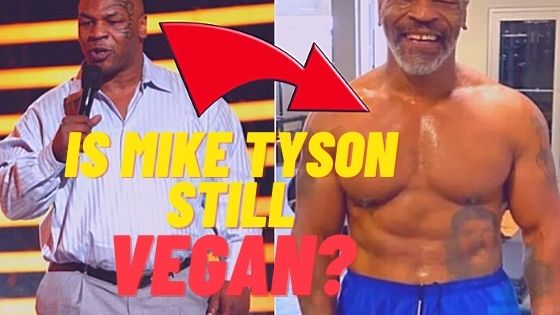 Everybody knows that Mike Tyson turned vegan in the last couple of years, he clearly said it in an Oprah interview, But things have changed in 2020.

Mike Tyson has decided to return to the ring to face four-division world champion Roy Jones jr. on November 28, 2020.

Parts of Mike Tyson’s preparations for the bout against Roy Jones Jr.

Mike Tyson said in the Joe Rogan Experience that in his preparation for this bout he ditched his vegan diet in favor of consuming red meat.

He said in the podcast that he started consuming red meat from wild animals like Elk and Bison.

He also said that he started noticing positive changes in his muscles and performance.

Here is what Mike said on the Joe Rogan Experience:

Joe Rogan: So you were vegan for a while, how long have you been vegan for?

Mike Tyson: For a couple of years, 5 years

Joe: When did it stop?

Mike: I don’t know, but not too long ago. When I look at food I don’t look at it like I used to, I look at it for what it is for.

Joe : to take care of the body?

Mike: I realized that things that are good for other people like kale, vegetables and all this stuff, blueberry, etc. for me it’s really poisonous

These things are not good for my blood type, health condition..

Mike: Kale is toxic to my blood

Joe: so when you were vegan, what were you eating?

It’s worth mentioning that Mike Tyson was never a strict vegan in the last couple of years.

He would take breaks from his vegan diet from time to time in restaurants with his family and friends.

Here is the “before” photo

Even though Mike’s body is not clearly visible in this post, but a high fat percentage and lack of muscle tone are obvious.

Here is a post from Mike’s Instagram where he is doing some diving on a TV show.

The transformation is amazing!

In this last post, Mike is not even flexing and his muscles are pumped and full.

Also, vains are popping out of his shoulders without him having to flex.

Abs are visible while he is sitting.

Congrats Mike on your amazing transformation!