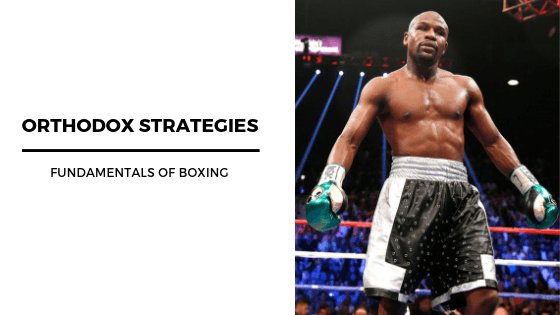 We have given our fair share of coverage to the southpaw style, collectively as well as individually in our efforts to cover boxers such as Manny Pacquiao and Terence Crawford.

However, in this blog, we’re going to cover strategies for Orthodox boxers. 8 in 9 boxers across the globe fight in this stance. Thus, without a doubt, they are in huge numbers, actively seek strategies so to overcome other orthodox and southpaw boxers, if they happen to be pitted against them.

Without wasting much time, let’s get to the strategies. First, we’ll cover up conventional vs unconventional fighters. Learn about their movements, their techniques, and how they strategize their overall boxing.

Circling to the left 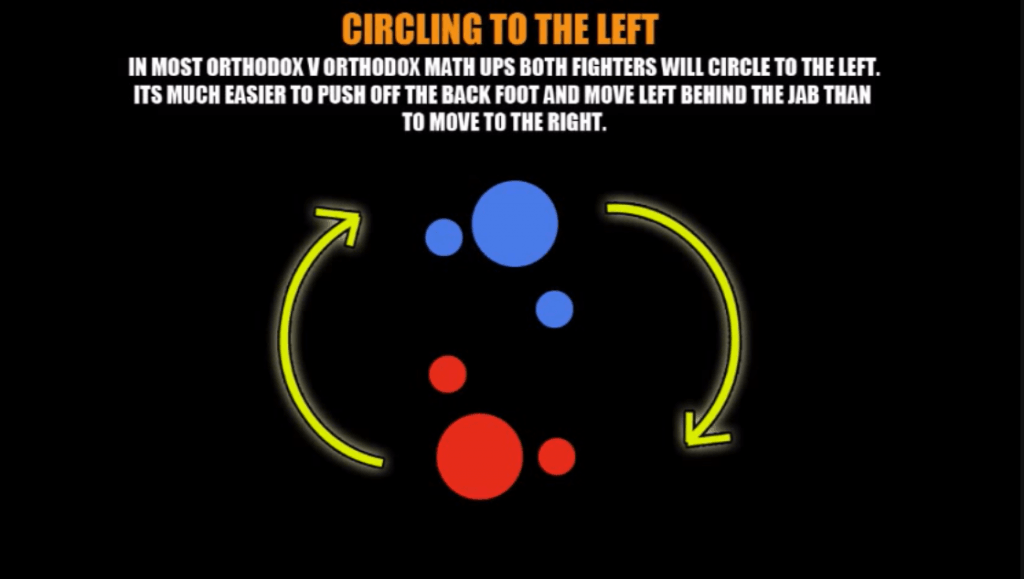 However, we’re here to learn something different, something unique, and for that purpose, we’ll be studying the opposite, i.e. Circling towards the right. 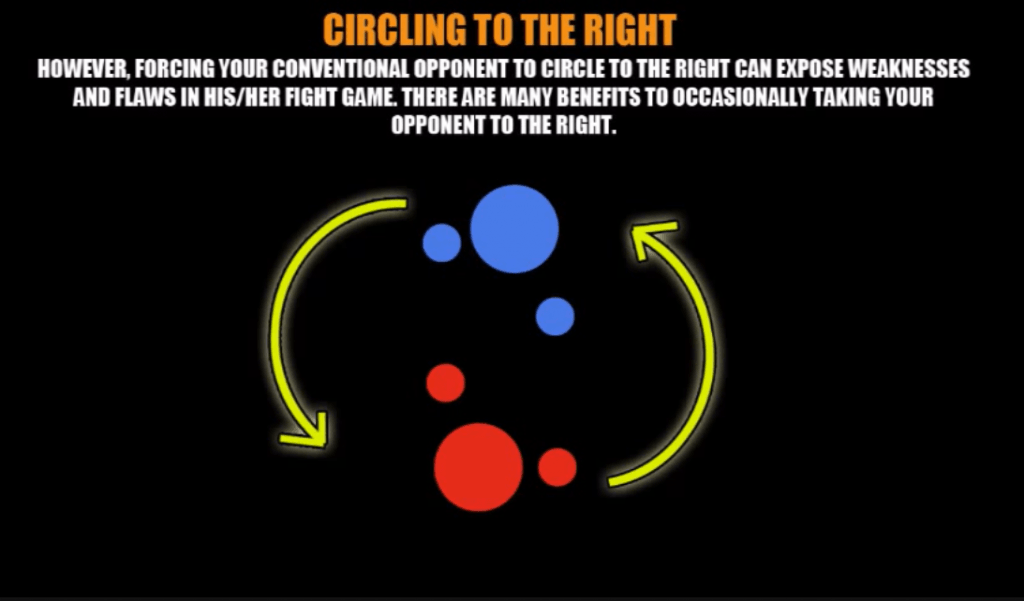 Keeping in mind that this is for two conventional opponents in the same ring. The illustration above shows each fighter circling towards the right. In this section, we’re going to talk about how you can force your conventional opponent to circle to the right to expose his weaknesses and flaws.

It’s an intended technique, where you take your opponent out of his comfort zone, i.e. him circling to the left whilst stepping out of your comfort zone as well. The reason why many great fighters opt for this is that it has considerable benefits.

Forcing your opponent to fight with one punch

Following up the point above, when you force your opponent towards his right, you technically force him to fight with one punch. Thus, they are just restricted to the jab alone.

The distance is too great for the right hand. And most of them won’t be able to generate enough power on the left hook. And even if they do, they will most probably telegraph their punch often. Thus, you just have to focus on that one punch, i.e. the jab. You can see Lomachenko using this technique to a great effect. 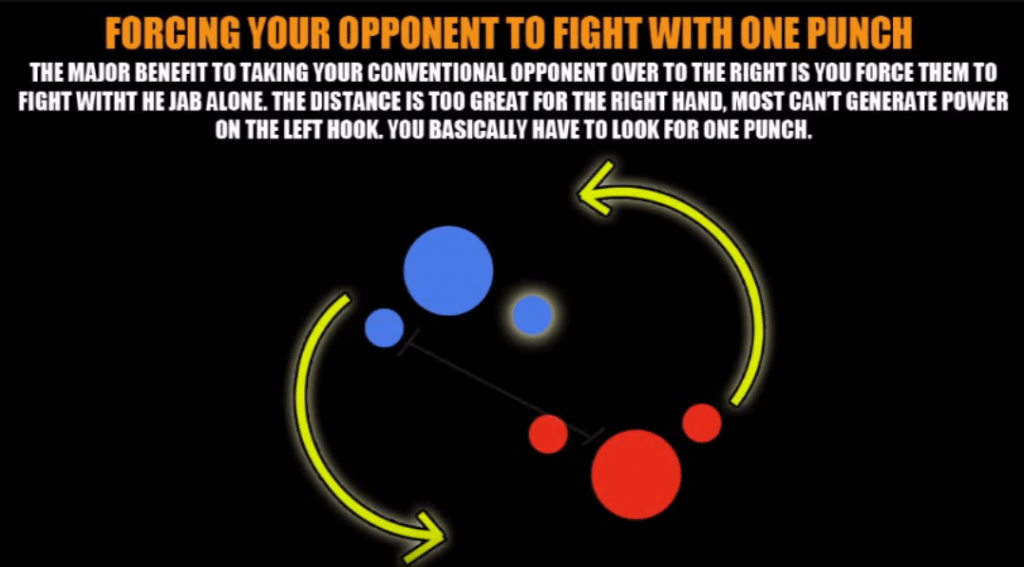 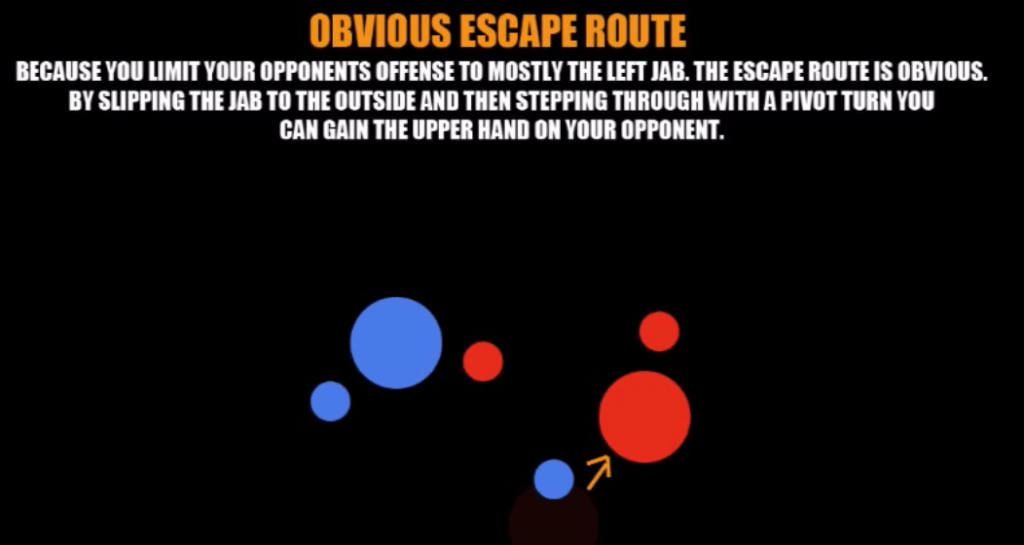 In the image above, you can see that the blue guy has just fired his left jab and the red guy has slipped the jab and then stepped through to the outside. That’s the obvious escape route, and by taking that route, he is able to establish an advantageous position over the guy in blue. All done by simply slipping the jab and then stepping out to the outside. We can see the visual representation of the same in the clip below.

Many might say that in the clip above, why didn’t Cotto make use of the left hook. If you actually stand up and imitate what the boxers are doing and with the distance there is. There’s no way, Cotto can generate tremendous power in his left hook. And as mentioned above, even if he does, he might end up telegraphing the punch.

We need to understand the boxing is a science. Thus, when you are forcing your opponent to the right, a key thing to remember is that even if you limit your opponent’s offense to the jab, you essentially have the same offensive tool. You can’t use your right, because similar to your opponent, it’s too far away.

The advantage is not with the hitting tools you have at your disposal but the knowledge of what you’re going to do to your opponent whilst forcing them to circle. When you force your opponent, they don’t know, they just flow as per the rhythm, but you know what your intentions are and thus that’s an advantage.

Read your opponent trying to cut off the ring

As you saw in the clip, Cotto was initially trying to cut off the ring. Your opponent will most try to move laterally towards the left, in order to prevent you from forcing him into the right. However, your movement can have a lot of say (which Floyd successfully manages to accomplish in the clip above against Cotto).

The key here is that if you understand that your opponent’s intentions are to keep circling all night long and not fall for your movements. You can use this to set traps to expose the centre line of your opponent and gain an outside angle on them. 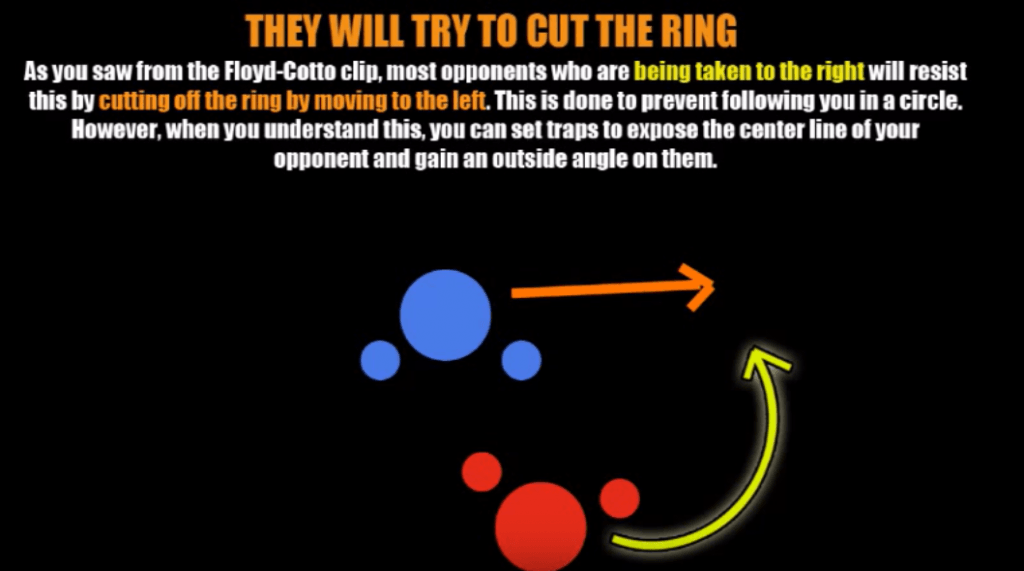 As a conventional boxer, you can force your opponent to move his feet to set up the trap. As we learned in the triangle theory. Lomachenko forces his opponent to move in a certain direction, and when he does, he attacks him, i.e. landing clean punches whilst he is trying to adjust his feet, thereby giving him no time to sort it out. Thus, you can say that he was two-steps ahead of his opponent because he knew where his opponent would end up. And thus, he knew how he was going to attack him.

Watch this clip below; it’s an awesome tip by Marvin to understand what I’m talking about.

As you just saw from the video, Marvin Cook demonstrated how he could step to the right and force his opponent to follow you. If you couldn’t follow what happened in the clip above, see the diagram below. 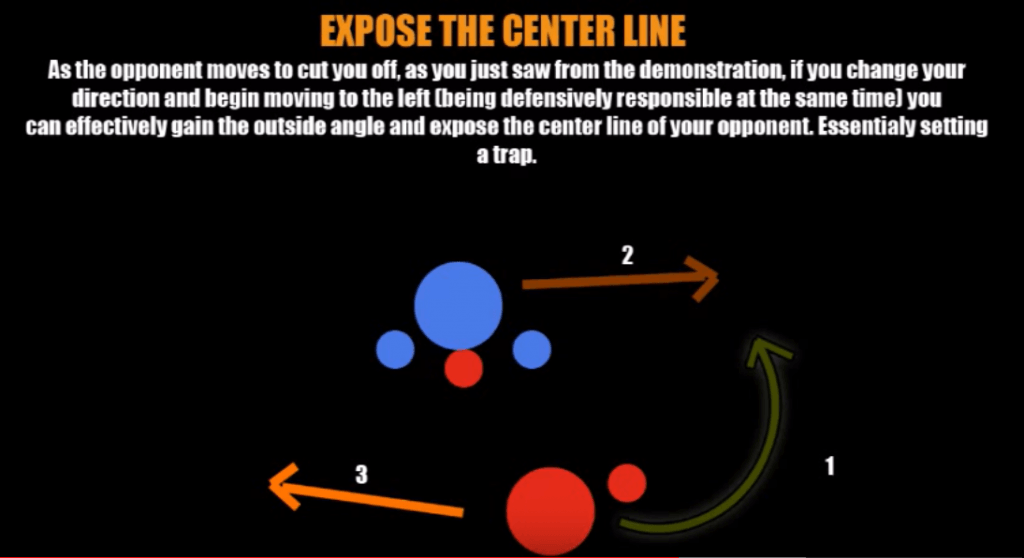 By doing this, you actually create an opportunity where you can expose the centerline of your opponent. You can throw punches while their position is trying to correct his position. Hope that’s clear. The whole point is trying to get them to adjust their position whilst they’re doing it, you land some clean punches.

Now, remember, some advanced fighters can bring in some offensive whilst they’re trying to adjust their position. Because not every fighter likes to neutralize the right hand and thus, they will gamble with it anyway. Now the benefit here is, that if they do so, they present you with a counter-punching opportunity. 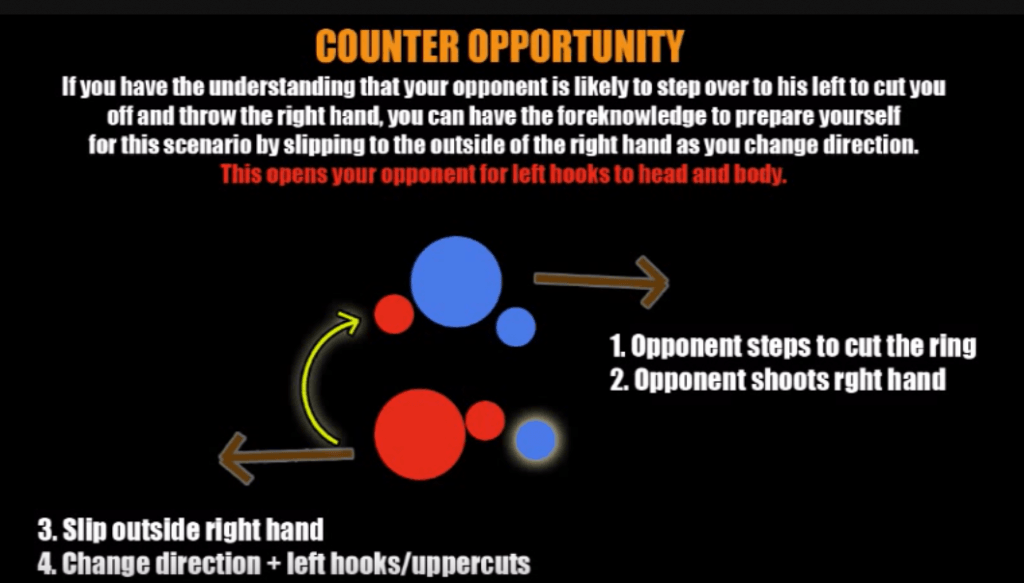 If you have the predisposition or the knowledge that your opponent is going to cut you off and throw the right hand. You can slip to the outside of the right hand as you change direction. This will allow you to open your opponent for left hooks to head and body. Check the 4 steps guide below.

I hope as a conventional fighter; you found this blog helpful. And to give credits where it’s due. I’m thrilled by the amount of knowledge I gain from these YouTube boxing analysts like Lee Wylie, Wilson Kayden, Brendan, and Marvin (the clip we saw above). It’s a pleasure to such simple breakdowns in front of us, so we can study and provide our outlook on the same.