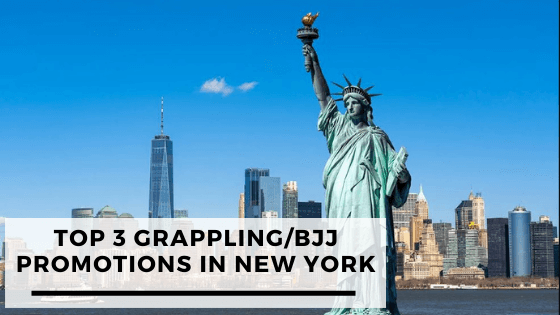 New York is one of the most popular places for Jiu-Jitsu enthusiasts to train and compete in the tri-state area.

Although it may be a bit expensive, New York offers some of the best Brazilian jiu-jitsu (BJJ) gyms around.

In this post, we’ll look at 3 of the best BJJ organizations that hold events in NYC. They are:

Let’s dive in and look at each of these organizations in more detail.

They are part of the newyorkfighting.com team and focus on the grappling community.

They have held events for Brazilian Jui Jitsu under the Eddie Bravo Invitational rules (no-gi submission only).

Their upcoming event, Rise 9, will be held at The Space Westbury Theater, New York, on July 16th.

The first-place prize for this competition is $7,500.

Jackhammer Promotions is one of the most popular MMA and BJJ organizations in New York.

With almost 10 years of experience, they have held events all over the state.

Their first event was held in July 2015, and they have gone on to host many successful events in the city.

They post their videos on Youtube, which has around 130 subscribers. Furthermore, they offer K-1, Muay Thai, BJJ, and MMA fights.

Ground Force Fights is a relatively new promotion, with its first event held in December 2016.

These are three of the best BJJ organizations in New York, each with its own unique offerings and advantages.

Whether you’re a BJJ practitioner or someone just interested in this exciting sport, they are all worth checking out.

Which one of these three BJJ organizations is your favourite?