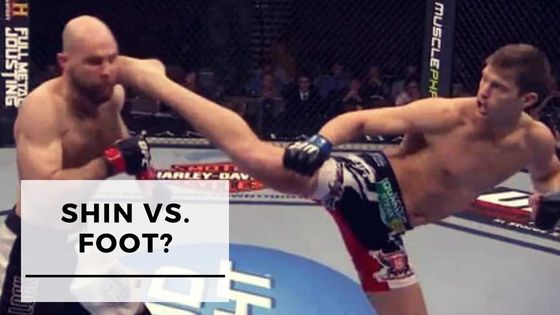 The answer is not that simple! You should know that none of the two techniques cancel the other, and to each their pros and cons.

What are the pros of kicking with the instep of the foot?

Kicking with the instep of the foot helps you cover more distance and therefore reach an opponent’s face from a longer distance.

The more distance there is between you and your opponent, the more protected you are.

Also, the large distance makes it harder for your opponent to reach you while you are still able to reach them with a roundhouse.

Human beings have a lot of control over the extremities of their limbs, and using your foot to land your kick gives you more control over where do you want to land the kick; chin, temple, back of the head, etc.

What are the cons of using the foot to land a kick?

The biggest disadvantage of kicking with your foot is the risk of injury!

A foot can be susceptible to easy fractures. If your foot connects with an elbow, the chances of tearing a tendon increase.

Stephen Thompson vs Dan Stittgen – The former kickboxing champion turned MMA pro sent Dan Stittgen to a different state of mind back at UFC 143 on his UFC debut.

What are the pros of kicking with your shin?

The shin is harder

This is the biggest advantage of kicking with the shin, it is much harder and has only bones – the tibia and fibula.

Also, the risk of tearing a tendon is so low because all the tendons are hidden behind the big bones of the shin.

The low risk of injury is why fighters always feel more confident to land high kicks with their shins in full power, which gives birth to spectacular knockout highlight reels.

It is worth mentioning that shin kicks are more commonly used in kickboxing and Muay Thai, while foot kicks are more used in taekwondo and Shotokan karate. In Mixed Martial Arts, both kicks are used.

What are the cons of kicking with the shin?

The main disadvantage of kicking with the shin is that you have to be closer to your opponent than when you hit them with your foot, so basically you lose around 11 inches (30 centimeters) of distance, which puts you at great risk of getting countered with a straight punch!

Kamaru Usman sent to another dimension by Leon Edwards

As a general rule of thumb, kicking with your foot should be targeting only the softer parts – the face, and the head. These are the areas with more success.

It is not intended as a ‘power’ kick, but rather a setup for a follow-up of punches. Kicking with the foot tends to be more accurate.

Kicking with the shin is more deadly due to the nature and thickness of the bones. Since it can be used on all parts of the body.

But the sacrifice that you will have to do is to get closer to your opponent, which will put you at their range of striking.