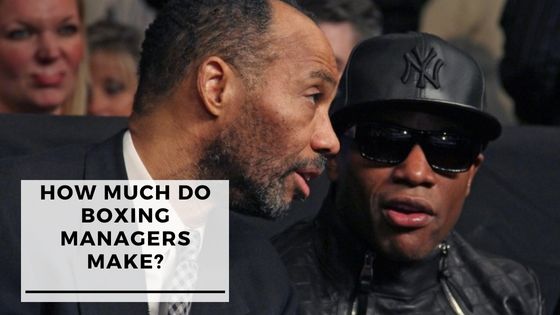 Being a boxing manager is a really lucrative job. They play a significant role in a boxer’s career, but they are often undervalued.

This is primarily due to the fact that they are frequently mistaken for agents and that their work frequently takes place in the shadows. Nevertheless, they are still paid handsomely.

Boxing managers make money by taking a cut of an athlete’s winnings.

The boxer, their primary income source, is paid. The boxer then pays the manager in accordance with the terms of the contract they made.

A boxer may only give their manager a maximum of 33.3% of their earnings in the United States, but depending on the strength of their negotiating position, the manager may receive as little as 10% to 20%.

Using his own share of the commissions and endorsements, the boxer’s manager is expected to handle all administrative tasks, including hiring the staff required for the boxer’s proper administration.

It is challenging to put a precise value on the amount that boxing managers make because it varies from manager to manager.

The salary of the manager may also depend on a few other factors. It is a hustling culture.

The drive and tenacity of the managers in pursuing the best possible outcome for the boxer determine how much the boxer earns and their cut at the end of the day.

Based on the figures we have, Al Haymon, Mayweather’s manager, will earn $30 million if Floyd earns $100 million from a fight. Then he also gets paid for the endorsement deals that he is able to find for his client.

Despite this, managing a boxer does not appear to be as simple as it may be. Some claim that their sole responsibility is to respond “yes” or “no.”

However, if it were that easy, the boxers would be wise enough to realize they were being taken advantage of.

However, managing a boxer is a legitimate occupation, and without a manager, the boxer could struggle to advance in their career.