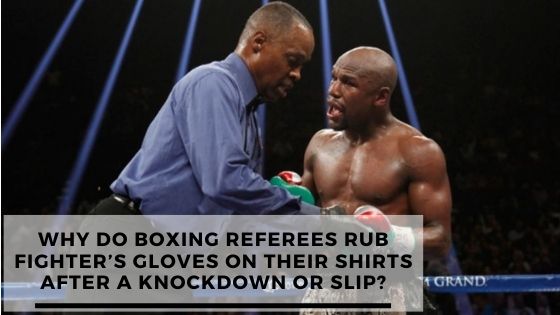 Why Do Boxing Referees Rub Fighter’s Gloves On Their Shirts After A Knockdown Or Slip?

In a boxing match, it is common to see a referee pull a fighter’s hand towards his body and wipe the gloves on his shirt after they have been floored, either by a slip or a knockdown blow.

This practice seems like a ritual, with no correlation to the fighting. However, there is a valid reason for it.

Boxing referees wipe boxers’ gloves because most times when a boxer falls in the ring, their gloves touch the canvas.

In this situation, dust or other particles can stick to the gloves, which poses a risk of causing injury to an opponent.

This debris could either get into an opponent’s eyes or lead to cuts on their faces.

Boxing fight cards do not consist of a single bout, but rather a series of fights as many as 10 fights, one after the other, taking place in the same ring.

This allows an opportunity for many kinds of materials to find their way onto the canvas.

Remember, after each fight, we have the announcer coming in to declare the results and interview the fighters.

We also have coaching teams, teammates and family members coming into the ring to celebrate with or console their fighters.

The tradition of referees wiping off boxers’ gloves dates back to the earlier boxing days when boxers wore shoes with smooth leather soles.

Those soles were slippery, and so to create friction and gain a better grip on the floor,  boxers used to coat their leather shoes in resin powder.

This powder would stick to the canvas and get on a boxer’s gloves when they came in contact with the floor.

Eventually, it would get in his or the opponent’s eyes and cause a burning sensation.

Although the use of resin is extinct in modern boxing with the advent of high-tech boxing footwear.

The practice of wiping gloves has remained useful in protecting fighters from foreign particles that can be harmful to a fighter.

In his world title fight against Sonny Liston, Mohammed Ali(called Cassius Clay at the time) fought the entire 5th round half-blind, due to a stinging sensation in his eyes.

He managed to fight through it and win as sweat and tears washed the substance away.

But it is an example of how fighters can be compromised by foreign substances getting into their eyes.

It was rumored that Liston’s corner had a habit of applying balms on his gloves to handicap opponents.

It was never proven though, and may just have been something that got stuck on his gloves.

Referees do an appreciable job of keeping fighters safe as much as possible, and this practice is just a part of their immense role.