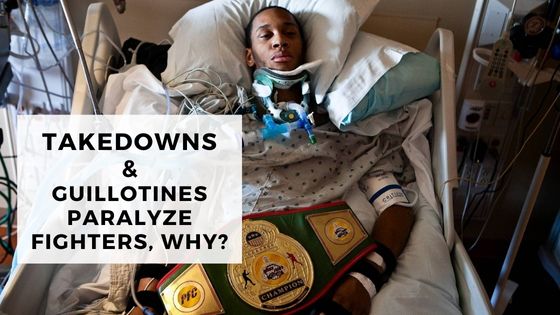 Why takedowns may cause paralysis?

A takedown always raises serious health concerns when done incorrectly. That means the pressure strains the neck, and that itself can separate the neck from the spine.

You may not necessarily get caught in a choke, but the process of quickly advancing on an opponent and attempting a takedown is risky as you would be going head first.

Are guillotines as dangerous?

When you get caught in a guillotine, there is the momentum of your opponent’s weight going to the ground with your own.

The person caught in the guillotine ends up going head first straight into the ground, causing devastating consequences. Freak accidents can happen to anyone.
Take Devin Johnson for instance.

‘’What Mr. Johnson unfortunately had was an injury between his fourth and fifth spine in his neck,” said Dr. Kee Kim, Chief of Spinal Neurosurgery at UC Davis Medical Centre in Sacramento, California. From inside the hospital, a team of doctors evaluated Johnson, including Dr. Kee Kim.
During a training session, Johnson himself went for a double leg takedown. His sparring partner caught him in a guillotine hold, but Johnson still attempted the takedown. Johnson’s head hit the floor while bent in the chokehold. This broke his neck. He fractured his fourth cervical vertebra, which dislocated and pushed into his spinal cord.

Paralysis is when the nerves stop sending signals to the muscles and brain. It can cause permanent or temporary paralysis based on the damage caused. It is described as being unable to make ‘voluntary’ movements. Paraplegia involves both legs while quadriplegia affects all the limbs.

Undamaged nerves often send signals to the muscles. Those signals make muscles move. In turn, you may not be able to move certain parts of your body.

Some people experience temporary paralysis and regain partial or full movement through time. Permanent paralysis means you never regain muscle control. The condition is irreversible. The nervous system is your body’s command and communication system. It sends signals from the brain throughout your body, telling it what to do. If something damages the nervous system, messages can’t get through to the muscles.

Although MMA is widely regulated in North America, the governing body cannot be relied or even depended upon to prevent big injuries in our sport.

Realistically, it is up to the fighters, trainers, referees, and officials to develop awareness and understanding that some moves and techniques of the sport are dangerous, and that catastrophic injuries have resulted in the past.