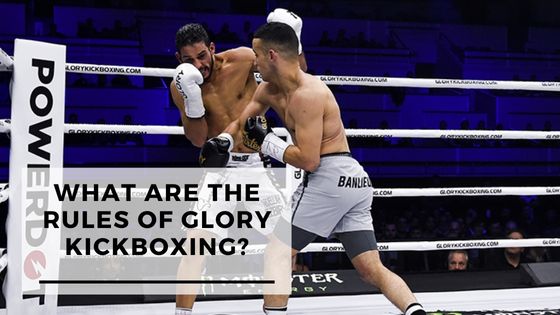 How many rounds are there in Glory?

Non-title fights are scheduled for 3 rounds, 3 minutes each.

Title fights are scheduled for 5 rounds, 3 minutes each.

Are spinning back fists allowed in Glory?

Yes, spinning back fists are allowed in Glory.

Is grabbing the leg allowed in Glory?

Grabbing the leg is allowed only if the fighter grabs the leg and throws a strike directly afterward.

Holding the leg for too long to put the opponent off-balance is not allowed.

Is pushing the opponent allowed in Glory?

Pushing the opponent must be followed by a strike. If a fighter pushes their opponent just to stop them from attacking, then it is a foul.

Are knees allowed in Glory?

Are sweeps and throws allowed in Glory?

Leg sweeps and muay Thai throws are not allowed in Glory. Any attempt of off-balancing the opponent is a foul.

Is clinching allowed in Glory?

Clinching is allowed only if it is followed by a knee. If the fighter holds the clinch for too long without throwing a strike, then it is considered a foul.

Are elbows allowed in Glory?

Elbows are not allowed.

What are the rules of knockdowns in Glory?

In normal bouts and tournament finals, if a fighter gets knocked down 3 times in a single round, they lose by TKO. They also lose by TKO if they get knocked down 4 times in the entire fight.

In tournament semi-finals a fighter loses by TKO if they get knocked down 2 times in a single round or 3 times in the entire fight.

Glory made the rule this way because fighters in semi-finals are expected to fight in the final, so they shouldn’t receive too much damage.

What is the rest period between rounds?

The rest period between rounds is 1 minute.

The color of gloves

In Glory, fighters wear either a black or white pair of gloves, depending on which corner they are in.

What is the scoring system of fights in Glory?

In Glory, they use the 10-point must system used in boxing and MMA. This means each round is scored separately.

Judges have to award the winner of the round 10 points and the loser 9 or 8 points depending on how they have lost the round.