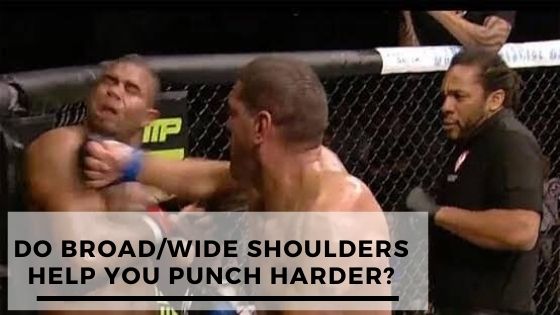 Since time immemorial, boxers have sought to increase the power of their punches, from lifting heavy objects to engaging in specialized training to tailor-made diet plans.

Punches in boxing are one sure way to knock opponents down – KO, so a boxer would naturally do anything to have a hard, powerful punch.

The shoulders play a very important role in boxing; they are a key feature of a boxer’s body.

This invariably means that the broader the shoulders, the better.

So back to the question – “do broad shoulders help you punch harder?” yes they do.

How are shoulders determined to be broad?

Shoulders are measured in relation to the pelvis – hip bone.

This means that a broad or narrow shoulder is determined by the span of the pelvis.

Since we’ve gotten this out of the way, a broad shoulder is a larger shoulder-span-to-pelvis ratio.

What this means in simpler terms is that for a shoulder to be considered broad, it must be wider than the length of the pelvis (hip).

Yeah, I see you running to the mirror to check. Gotcha!!!

How the broadness of shoulders is calculated?

This can be determined by taking a measuring tape to measure from the joint of one shoulder to the joint of the other.

Then the circumference of the waist is measured by wrapping a measuring tape around it.

For example, if I get the width between shoulder joints to be 42 inches and the waist measurement to be 28 inches, then 42 divided by 28 gives a shoulder-to-waist span of 1.50.

The size of broad shoulders

The width between shoulders is affected by a range of factors from genetics to weight to body type.

Wide shoulders give an advantage to boxers as it increases punch power.

Punching power relies heavily on shoulder rotation, having a broad shoulder gives a boxer more rotation when driving a punch at his opponent.

These muscles act as a piston for the arm when throwing a punch.

Broader shoulders drive the arm forward with much speed, therefore, increasing the power of the punch.

This can be likened to a rocket taking off.

Still talking about speed, the punch of a broad-shouldered boxer would be faster as a result of the ability of the shoulders to take the arms further out from the pivot point – point of rotation.

The faster the arms move out, the harder the punch becomes.

This is like the basic physics of ‘force’ – force=mass x velocity.

This brings us to mass; we talked about the force and stated its relation to mass and velocity.

Having talked about speed above, we will now talk about mass.

When considering the power behind a punch, the effective mass of the shoulder comes into play.

This resultant increase in mass coupled with the advantage of the speed at which the arm is thrown culminates into a deadly punch.

Boxers with broad shoulders have their body mass spread out farther from their pivot point.

The farther out the body mass is spread, the more energy it has when it is rotated.

All in all, broad shoulders add more power to a punch.

Though some might argue that this makes up for just a little fraction of the punching power, there’s no doubt that it does add more sting to a punch – float like a butterfly, sting like a bee.